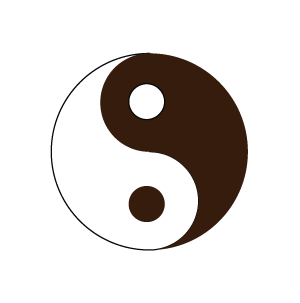 Yin and Yang literally means “shadow and light”, and Yin-Yang Dualism has been used in Chinese philosophy to describe the interactions between two forces.

Represents the dark side of everything.
Characterized as: cold, wet, negative and passive.
Associated with: water, earth, the moon, femininity, and night time.

Represents the light side of everything.
Characterized as: hot, dry, positive, and aggressive.
Associated with fire, sky, the sun, masculinity, and daytime.

Yin and Yang ties into the Japanese Zodiac by assigning a Yin and a Yang force to each of the five earthy elements, resulting in ten possible combinations. The Japanese names for Yin and Yang are:

Determining if your birth year is Yin or Yang