Japanese Year of the Rabbit 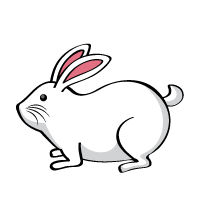 The rabbit is the fourth symbol in the Japanese Zodiac. In ancient China, white rabbits were considered as a propitious augury. As rabbits live peacefully in groups, this symbol represents “well-being of a family”. It also represents “great progress in business” because of the way they leap forward.

Rabbits are optimistic, warm, virtuous and broad-minded. While they are lovable and are regarded with admiration and trust most of the time, their trusting nature means they can be deceived easily.

You can identify a rabbit if they:

Rabbits are most compatible with sheep and boars. If these three come together, it generates a great positive power. Rabbits also have a mutually beneficial relationship with dogs. Roosters are the least compatible with rabbits.